What causes psoriasis: the main causes and methods of treatment 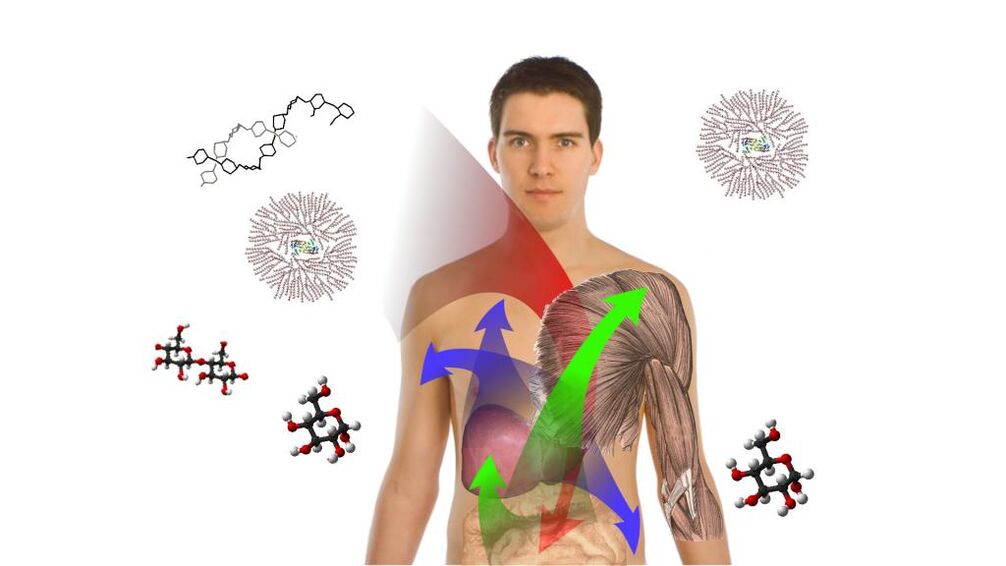 Psoriasis is a chronic dermatological disease of the skin. Psoriasis is expressed in the form of papules (swollen spots) of red color. In recent years, the disease has been increasingly common in people between 20 and 30 years of age. Unfortunately, the modern level of medicine cannot prevent the spread of the disease. Why does psoriasis appear, what should be the effective treatment? Let's figure it out in more detail.

Causes of the disease

There are many different kinds of assumptions in the world about what causes psoriasis. However, this issue has not been fully studied in medicine. There are various theories, but where psoriasis comes from is still not clear.

There are two main types of psoriasis: due to a hereditary factor (there is a shift in the immune system) and the so-called "late onset type" - after 40 years (affected areas - nails and joints).

Why does psoriasis appear?

At the modern level of medicine, psoriasis is considered as a failure in the integral system of the body, and not as a separate disease. In addition to typical skin rashes, patients suffer from dysfunction of the endocrine system, nervous and immune.

There is no single answer to the question of what causes psoriasis. There are several typical theories of psoriasis. Let's dwell on each of them in more detail.

The immune theory is recognized by many doctors around the world. According to this theory, psoriasis occurs due to dysfunction of the body's immune system. What causes psoriasis on the body? Typical papules (bright red spots) appear as a result of autoimmune aggression. The immune system perceives skin cells as foreign, so it gradually rejects them. In their place, characteristic papules appear. 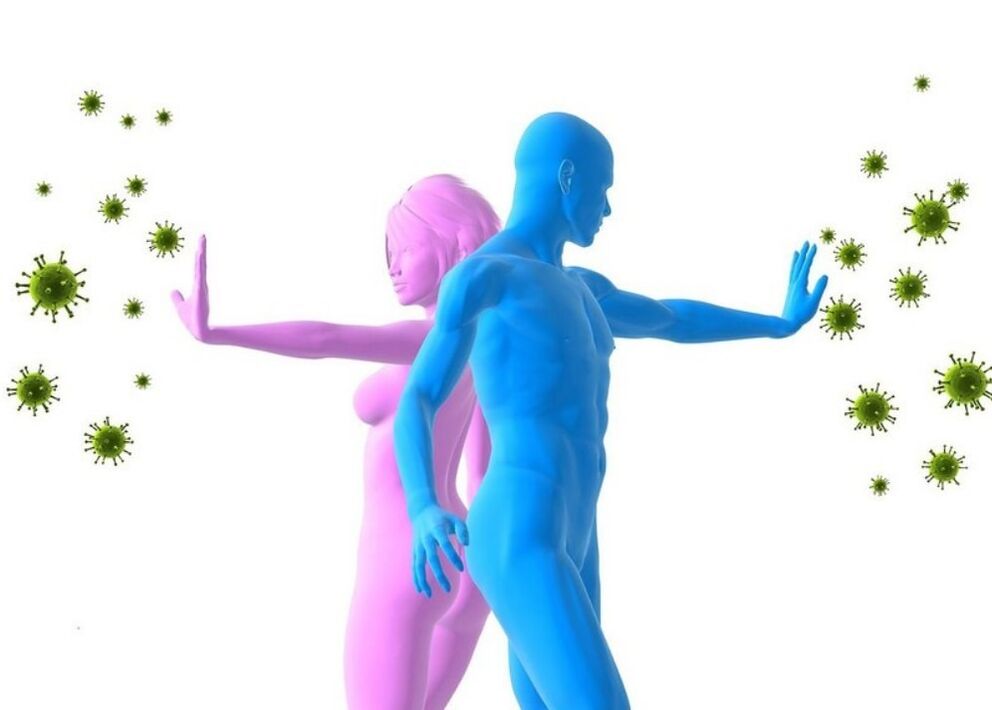 Long ago, doctors established that psoriasis can develop against the background of ongoing infectious diseases: sinusitis, tonsillitis. This theory has a right to exist, since dysfunction of the immune system and provokes psoriasis. When studying papule scales, scientists found that they contain antigenic complexes that are not characteristic of healthy cells. There are antibodies to these complexes in the blood, so rejection occurs - papules are formed.

Low immunity is a fertile ground for the development of psoriasis.

At the genetic level

Unfortunately, psoriasis can be inherited. However, it should be borne in mind that it is not the disease that is transmitted at the gene level, but the predisposition to it. This fact is confirmed by direct statistics: 60% of patients with psoriasis have blood relatives who have the same diagnosis. 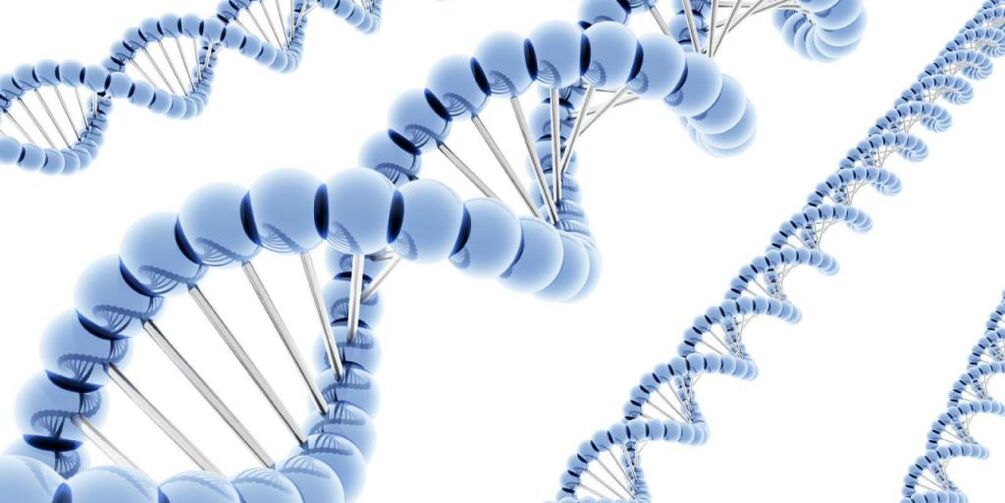 If one of the parents is sick with this disease, then the probability of psoriasis in a child is 25%. If both parents suffer from psoriasis, the risk rises to 75%.

Scientists have proven that the disease is directly related to the chromosome region, which determines the level of the inflammatory response in the skin. However, genetic predisposition cannot be considered the main cause of psoriasis.

Some peoples are resistant to psoriasis. Among them are the Indians who live in the Andes, the Eskimos. These peoples have genetic characteristics, thanks to which their representatives never get psoriasis.

What causes psoriasis in adults? According to endocrine theory, psoriasis can result from hormonal dysfunction. This theory was put forward by doctors after carefully analyzing the course of the disease itself. Excessive production of skin cells is believed to be the result of a dysregulation of the body's regulatory function. Accordingly, due to dysfunction of the endocrine system. 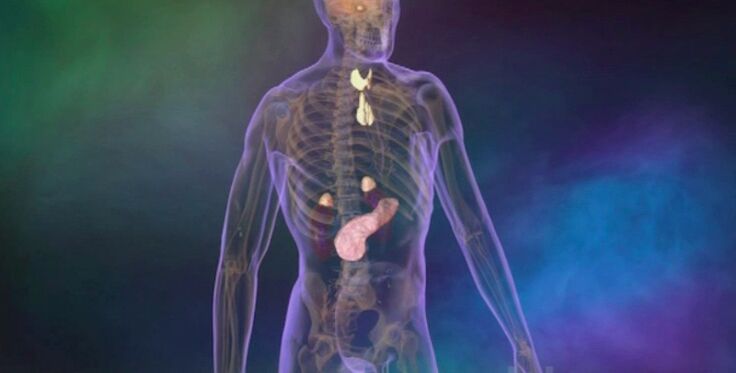 During hormonal surges in women (ovulation and menstruation) and during pregnancy, psoriasis is activated. However, until now, scientists have not identified a hormone that affects the appearance of psoriasis as such. It is for this reason that the endocrine theory cannot be said to be fundamental.

The neurogenic theory is considered one of the newest. According to her, psoriasis arises "from the nerves", respectively, psychological factors are to blame. Psoriasis provokes neurosis. As a result of neurosis, the blood vessels are narrowed, the blood supply to the skin is weakened, therefore papules are formed.

Therefore, it is not for nothing that all the people around, when asked about what causes psoriasis, immediately answer that it is from the nerves. 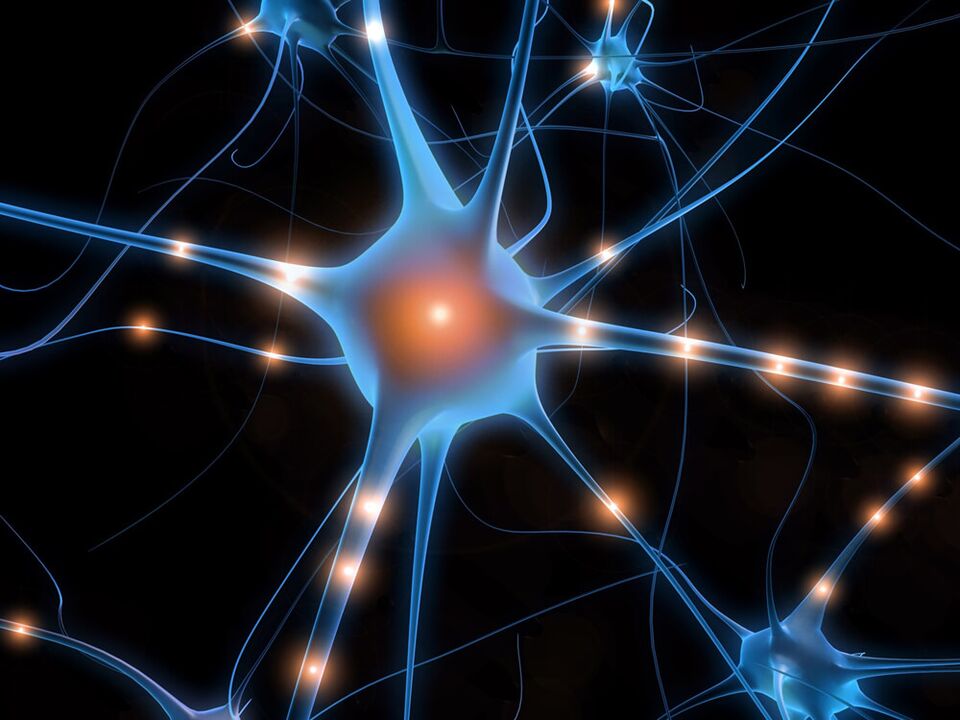 According to a number of studies, it becomes clear that stress, deep inner experiences, nervous shocks are stimuli for the appearance of skin rashes.

There is also a viral theory. Within its framework, doctors argue that psoriasis can appear as a result of infection. Indeed, during infectious diseases, papules appear more often, and lymph nodes increase. However, some doctors attribute such changes to a weakening of the immune system in general.

In the entire history of the disease, no specific pathogen has been identified that would provoke the appearance and development of psoriasis. 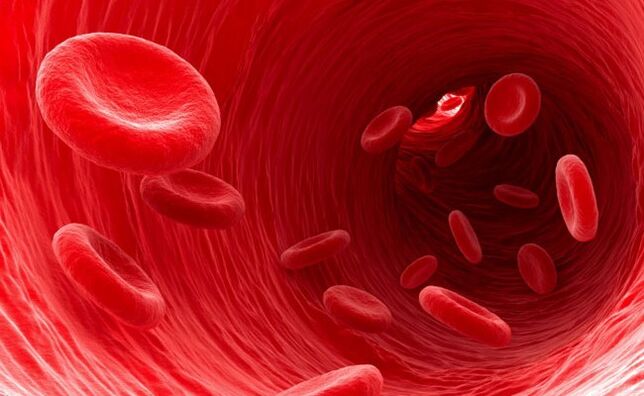 Psoriasis is a disease that is not transmitted by contact. Not a single case of infection with this disease was recorded even after a blood transfusion from an infected person to a patient.

During psoriasis, many patients have a low temperature, high cholesterol levels, impaired metabolism of vitamins, carbohydrates and trace elements. All this indicates signs of metabolic disorders in the body.

As a result of repeated studies of patients with psoriasis, doctors have come to the conclusion that one of the causes of the onset of the disease lies in the violation of metabolic processes.

Factors that trigger the appearance of psoriasis

In order to understand exactly what causes psoriasis, it is necessary to outline the range of factors that can provoke its appearance. Among the most powerful factors are the following:

The cause of psoriasis can be hidden in one of the factors. Therefore, a patient suffering from this disease should minimize the manifestation of the above external factors affecting relapse.

Psoriasis can manifest itself at any age, including children. Moreover, the earlier the disease appears, the more accurately it will eventually pass into an advanced stage.

How psoriasis appears, the photos below demonstrate: the formation of a rash, cracks, papules on the surface of the skin (red spots with white scales).

The first signs that indicate psoriasis are:

With the progression of the disease, the number of papules increases to 10 cm. The skin in the damaged areas is sensitive, but the hairline remains.

There are various forms of manifestation of psoriasis: 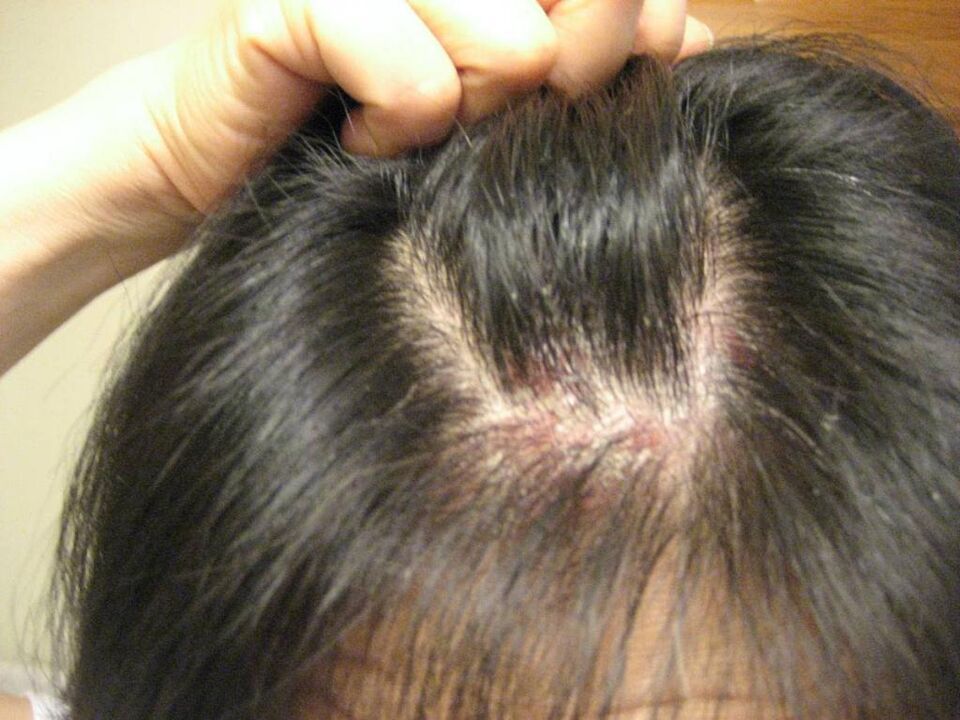 What causes psoriasis on the hands? The reasons are purely individual. 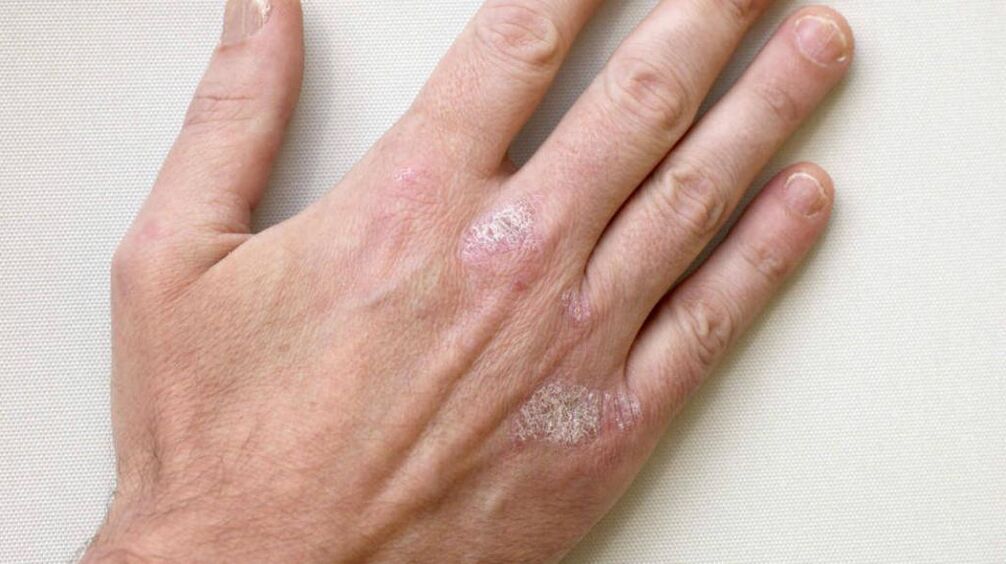 There are various factors and theories that are not fully proven. However, many doctors agree that the causes of psoriasis can be hidden in disorders of the immune, nervous and endocrine systems.

There are three stages of psoriasis:

In order to correctly diagnose and determine the stage of psoriasis, a professional consultation of a dermatologist is required. With the help of visual examination, laboratory studies and microscopy, he will be able to make an accurate diagnosis and determine the existing stage.

Psoriasis appeared: what to do?

Psoriasis is a complex disease, its treatment takes a long time. Relapses often appear even after prolonged remission of the disease. The main goal of treatment is to eliminate skin rashes. That is why it is necessary to prescribe treatment on an individual basis, relying on the development of the disease, accompanying symptoms and relapses.

External and internal remedies are distinguished among the main methods of treatment.

In addition to drug treatment, the patient needs to remove sweet, fried, spicy, smoked foods from the diet. Do not eat ice cream, coffee, carbonated drinks, mushrooms or pickled foods.

Psoriasis is a chronic disease that is not transmitted by contact. The causes and factors of the appearance of psoriasis are striking in their diversity, so almost every person can be at risk. That is why it is necessary to be attentive to your own health and to strengthen the immune system. Avoid stressful situations and nervous strain! Think first and imagine how stress may turn out to be for you in the future. Be healthy!