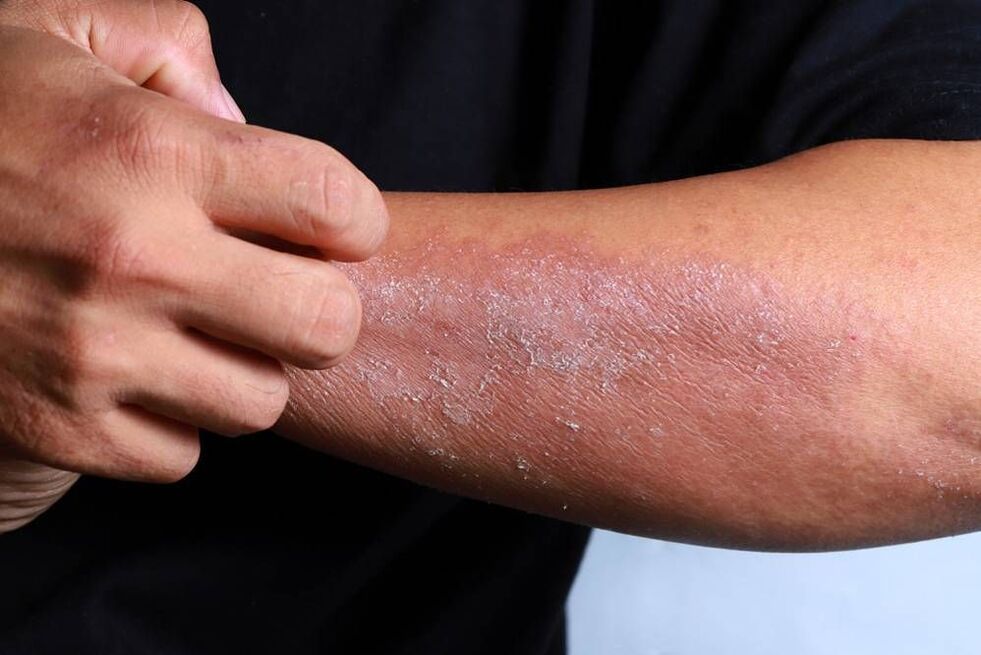 Psoriasisis a chronic inflammatory skin disease. This is a genetic disease that manifests itself in the form of characteristic formations on the patient's body: papules or plaques of pink-red color visible to the eye, the surface of which is flaky and covered with scales. The disease, as a rule, is accompanied by severe itching and pain, causing suffering to patients, both physical and moral. Psoriasis rashes can appear on any part of the body, but most often they are localized on the scalp, elbows and hands of the patient. Chronic psoriasis on the head especially often causes moral discomfort to patients, because it cannot be hidden under clothing.

What is the origin of the name psoriasis?

The name of the disease "psoriasis" comes from the Greek word - Psora - to scratch (-sya). Indeed, itching of rough, scaly, silvery-white skin, difficult to treat, is a typical picture of the manifestation of this disease.

Who is affected by this disease?

A disease such as skin psoriasis affects approximately 3-5% of the population in different countries. Men and women - equally. Psoriasis can develop at any age, but it usually first appears around the age of 20, often earlier in women than in men. However, the Medical On Group Corporation has collected impressive statistics on the treatment of children and the elderly suffering from this disease.

In addition to heredity, psoriasis has the following causes:

Ordinary vulgar psoriasis is a hereditary, genetic disease accompanied by metabolic disorders, endocrine glands, immune system lesions. Psoriasis is not contagious! It is not an external infection, and there is no need to fear or avoid people suffering from this affliction.

Is it likely that the children of parents with psoriasis will also have this disease?

Since we are talking about a hereditary, genetic disease, there is such a probability, and it is quite high: if both parents suffer from psoriasis, then the children will be sick with this disease with a probability of approximately 33. 3%.

Is it good for sick people to spend as much time in the sun as possible?

It is generally accepted that the sun's rays in a certain amount contribute to the treatment of psoriasis, but in some cases, exposure to the sun, on the contrary, can exacerbate the process. Be that as it may, before any medical procedure and if any changes in the condition of the skin are detected, it is recommended to consult a professional dermatologist.

What causes periodic outbreaks and waning of the disease?

Experience shows that mental stress, stress and neuroses, unhealthy lifestyle and diet cause exacerbated manifestations of psoriasis. In addition, cases are not uncommon when the disease worsened even more precisely as a reaction to irrationally formulated treatment.

Does smoking, drinking alcohol affect the course of the disease?

Yes, it does. Smoking and drinking alcohol adversely affect the development of the disease, may contribute to the intensification of the manifestations of psoriasis.

Treatment of psoriasis. Is it possible to?

Hereditary psoriasis on the legs, arms or head is one of the most common but difficult to treat skin diseases. Psoriasis is characterized by scaly redness on the skin, the appearance of which is not caused by an infection, but by increased cell division. In a healthy person, a complete renewal of skin cells occurs in almost a month, and in a patient - seven times faster.

Exacerbation of psoriasis can be caused by stress and physical overexertion, wounds and cuts on the skin, streptococcal infection of the upper respiratory tract and a reaction to medication. Unfortunately, it is impossible to protect oneself from all this, which means that medicine is not yet capable of either preventing an attack of the disease or completely curing it. But to control the course of psoriasis, choosing effective methods of treating symptoms, modern dermatologists are quite capable.

Can psoriasis be permanently cured?

Since we are talking about a hereditary, genetic disease, the treatment of psoriasis offered by modern medicine comes down to getting rid of the external manifestations of the disease, cleaning the patient's skin from rashes for a long time.